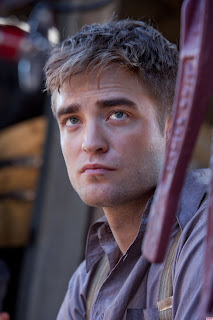 From a dapper black tux to grungy combat boots, Robert Pattinson dons plenty of handsome looks in the upcoming flick, "Water for Elephants." So, really, who would have guessed that his pièce de résistance on set was none other than 1930s-style underwear!
Yes, that’s right. Period underwear. Rob had to wear them to get in character for "WFE," and apparently he was a big fan, according to costume designer Jacqueline West.
"He loved that I had period underwear for him," she told Hollywood Crush recently (no doubt sparking the envy of girls EVERYWHERE). "Yes, and he loved putting that on every morning before he put his costume on, you know, he said that in his trailer, and he said it made him, it transported him to the '30s. He said he got out of bed feeling like a different person."
The underpants, along with his other period costumes, helped Rob step into the role of Jacob Jankowski, a vet student who joins the circus during the Great Depression after losing his parents, Jacqueline shared.
"I can see Rob, who is very languid, he’s very modern in his movements and he’s very cool. I could see him sort of kind of become Jacob and become a '30s young man, who was, you know, gonna work hard to carve an existence in this circus," she said.
Jacqueline also added that Rob, who was "manlier" than she expected (more on that next week!), carried the clothes very well.
"He would wear clothes so beautifully and you would see kind of a transformation, you know. If he put on those World War I combat boots, his work boots, you can see him stand differently. And I could tell, Rob would say, 'Oh, this really feels right. This feels great.'"
As for whether or not Rob's undies make a cameo in the film, Jacqueline hasn't seen the final cut to know, so you're just gonna have to wait until the movie comes out on April 22 to find out!
MTV | Robstenation
um 7:59 PM

Email ThisBlogThis!Share to TwitterShare to FacebookShare to Pinterest
Labels: Water For Elephants