According to the Official Twilight Saga UK Twitter and Facebook, the UK Premiere will take place on November 16th and Rob, Taylor and Bill Condon are confirmed to attend.

David Cronenberg Talks About Rob and His Fans "He's very sweet, signs all the autographs, the girls are happy"

You can watch the HD full interview at Tribute
via CosmopolisFilm and RPLife
um 11:08 PM No comments: Links zu diesem Post Translation of the official press release

"For the release of Breaking Dawn Part 1, Robert Pattinson and Ashley Greene will be in Paris on October 23rd and 24th, to promote the movie.
While we wait for the USA worldwide premiere in November, SND (French distributors of the movies), decided to organise a big event to suprise French fans.

Sunday, October 23rd, around 500 fans will have the chance to meet Robert Pattinson and Ashley Greene and ask them the questions of their choice. This meet and greet will be free and will take place at Gaumont Capucines.
We will send more details on this event next week, as well as how to get tickets."

HQ Pics - Thanks to PattinsonLife and RPLife 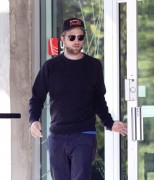 David's pics from that day.

More pictures of Rob after the jump.
thanks to PattinsonLife and RPLife for the pics!
Read more after the cut!
um 1:53 PM No comments: Links zu diesem Post

EW: But Kendrick tells EW she’s glad she doesn’t have to deal with flashing lights and screaming fans on a daily basis. If only her Twilight co-stars Robert Pattinson and Kristen Stewart were so lucky. “I feel really, really, genuinely fortunate not to have to deal with that right now,” she admits. “It’s like a prison. It’s a really nice prison, but so what? You still can’t leave your home. I feel happy that that’s not my reality right now.”

More of Kristen's Q&A from Premiere Mag (France) which we posted early September.

PremiereMag Website
P: The first Twilight movie was a teenaged love story, the second a love triangle and the third, looked almost like a war movie. How would you describe Breaking Dawn?
K: It’s more a family drama. Contrary to the previous films, everybody is united in this one. The beginning of the movie sets up a ton that literally departs from the other movies, which in my opinion was what the saga truly needed. It’s fun, it’s light, we finally see the characters happy. Of course, it doesn’t last long…


P: I admit I have a soft spot for the first movie. I felt like the next two were just there to stretch the story in vain.
I understand and I agree, the first one had something. It was original and stands out by itself. I felt like the book was well represented, that Stephenie’s hand was visible. It’s the peak of the story we tried to build for 3 movies. It’s the grand finale with all the excitement that goes with it.
Thanks to KStewDevotee | Translation via @eurofabulous | via Robstenation

More HQ Pics of SnowStew after the jump!
Thanks to kstewartfans for the pics!

"[Stewart's movie] is very dark and edgy and very cool. Ours is more of a comedic adventure, very much the fairytale that you'd expect with the costumes, hair make-up, sets - it's a giant fairytale." - Lily Collins

OK Magazine
And how about the big baby delivery scene? Despite his doctor role, Peter dished, ”Well, its not a spoiler because its in the books, but Carlisle was out at the time so he did not get to deliver Bella’s baby, but I guess that’s true to life because whenever you have your doctor and he says he is going to be there, he is always on vacation. He’s like, ‘I’ll be there for sure,’ and then you get there and he is on vacation. He is on the 9-hole playing golf.”
Although he was MIA for the on-screen birth, his costar Kristen Stewart got a burn on her stomach once and actually turned him to medical advice! “She spilled something on her belly and a had a little burn so I looked at it for her and I told her to like put some kind of salve on it and I wastelling how to treat it so that it wouldn’t scar or anything. It was funny.”

Director Rupert Sanders also mentioned the burn at Comic-Con when he recalled first meeting her on the ‘Breaking Dawn’ set. “I walked into her trailer and she was chewing on a cigarette while dressing her own wound on her stomach.”

via RPLife
um 10:44 AM No comments: Links zu diesem Post