Livestreams for the Balenciaga Fashion Show in Paris Tomorrow

Time: starts at 10am Paris time | 4am ET | 1 am PT (check your time with the time zone converter)
Livestream: on Balenciaga’s facebook | on Balenciaga's official site

Kristen is not confirmed to attend but since she's the new face of Balenciaga's new perfume and arrived in Paris today, the chances are high! Fingers crossed!
um 6:00 PM No comments: Links zu diesem Post

More pictures after the jump

Charlize Theron chats about SWATH and working with Kristen.


What can you share about Snow White and the Huntsman?
Filming it made me feel like a teenager, like I was 12. The movie itself is a very ambitious project, and to me playing Ravenna was a lot of fun.


What was it like filming with the young Kristen Stewart, who plays Snow White?
From the moment we met there was this amazing chemistry between us. We had a great time filming that movie. I really hope people enjoy it. Kristen is only 21… I remember when I was that age. Her performance is fantastic. In fact, she’s quite the fighter.


Thanks to TwilightPoison | Via kstewartnews
um 11:06 AM No comments: Links zu diesem Post

Thanks to kstewartfans
More HQ pictures after the jump
Read more after the cut!
um 10:44 AM No comments: Links zu diesem Post

Email ThisBlogThis!Share to TwitterShare to FacebookShare to Pinterest
Labels: FanMade

The WonderCon takes place on March 16 till March 18, 2012 in Anaheim, CA. Director Rupert Sanders is the only one confirmed to attend.

Update from the On The Road UK Facebook page:

"BIG NEWS!!!!!! The UK release date for ‘On the Road’ is officially scheduled for September 21st, 2012. Mark it in your calendars!"
via KStewartUK

"On the road poster will be released tomorrow or after tomorrow the latest, enjoy!"

Thanks to Chiara (PinkPunk83) for sharing with RobPattMoms | Via PattinsonLadies
um 1:39 PM No comments: Links zu diesem Post

"I really like Kristen Stewart in the Twilight movies" - Jennifer Lawrence

You're kind of an "it" girl at the moment. Are you glad you didn't get the role of Bella in Twilight?


Jennifer Lawrence:  No. I think that everything happens for a reason. Everything happened the way that it did, especially because I really like Kristen Stewart in the Twilight movies. I can’t really imagine anybody else doing it; I think she’s a great Bella. I’ve never really been disappointed about not getting anything. I mean, I was just with every actor in New York or LA auditioning for whatever’s out there. But I felt that whatever is meant to be, will happen. I actually had no idea what they were. When the movies came out, I went "Wow!"

Update from the On the Road UK Facebook page:

Update from the official German "On the Road" homepage:

Thanks to SpunkRansom!
um 4:06 AM No comments: Links zu diesem Post

2 New/Old Videos of Rob in Berlin

Arriving at the press conference/signing for fans

But the former H and M model might have trouble making incognito high street shopping trips if she becomes as famous as Twilight star Kristen Stewart.

‘I look at Kristen Stewart now and I think, “I’d never want to be that famous”,’ she says. ‘I can’t imagine how I’d feel if all of a sudden my life was pandemonium.

‘But I love my job. I can take months off, and I get a lot of money – way more money than any 21-year-old should have – so what is there really to complain about?’

Thanks to TodoTwilightSaga
um 3:26 AM No comments: Links zu diesem Post

"The world’s favourite vampire is in Berlin for a whirlwind visit and, true to bloodsucking type, Robert Pattinson isn’t eating. Tonight, he will do the red-carpet thing for the world premiere of his new film, Bel Ami, but in the private hotel lounge allocated for this interview — “This is classy,” he comments as he strolls in — he barely makes a dent in the chicken salad he has ordered, despite his professed hunger.

Pattinson isn’t known for playing characters who do much smiling or laughing, either, so the first thing to notice is how readily he does both in person. Decked out in a black-grey ensemble and sporting a new cropped haircut under his black cap, he has barely sat down, with a pack of Camels by his side, before he’s folded up in mirth, talking about the KitKatClub, a notorious Berlin sex joint, and his desire to ­patronise it with his family. Is he joking? I hope not. “I was telling my dad about it last night, and he sounded really into it. ‘I’m coming over — let’s go to the orgy club.’ ”

The 25-year-old actor has been to Berlin many times. One of the best holidays he ever had was a stay in the east when he was 17, “before it was so gentrified”, ­frequenting bars that took up illegal residence in abandoned buildings. Such footloose times are seemingly in the past for the star of Twilight, although his desire to hit the KitKatClub may indicate otherwise. The other observation to make is that Pattinson is a very handsome man, but his face is less wide and flat than the camera makes it appear. And there are enough imperfections to separate him from the standard Hollywood pretty boy.

Nobody wants to see a dickhead succeed — that’s why I wanted to do it
It is easy to see why he is ideal casting as a heart-throb vampire, but equally why he got the role of Georges Duroy, the ­insatiable money-and-lust monster at the heart of Bel Ami. This adaptation of Guy de Maupassant’s belle époque novel marks the directing debut of two of our most acclaimed theatre practitioners — Declan Donnellan and Nick Ormerod, the founders of Cheek by Jowl. Of the projects Pattinson has chosen with the Twilight safety net in place, the first two, Remember Me (2010) and Water for Elephants (2011), were unadventurous romantic excursions, unlikely to ­perturb even the most rabid Twihard. Bel Ami is where it gets interesting.

Georges Duroy is essentially the anti-Edward Cullen, an opportunistic cad who deploys sex for ruthless gain, screwing people — literally, in the case of the rich society wives played by Uma Thurman, Christina Ricci and Kristin Scott Thomas — on his rise from impoverished soldier to powerful Parisian. Cullen is the charming, soulful vampire who gets the girl; Duroy is the charming, soulless parasite who gets everything but his own comeuppance. Pattinson nails his repellent, empty charm, sneering as he seduces.

Sticking closely to the Maupassant source is one of the many strengths of Donnellan and Ormerod’s gorgeously ­realised vision, and Pattinson admits that tweaking Twilight-fuelled preconceptions was an original lure. “But my ideas about it changed as I was doing it,” he says. “Georges keeps getting beaten down by the world, but he never learns. He succeeds because of the bad points of his personality. Nobody wants to see a dickhead succeed — that’s why I wanted to do it.”

For their part, Donnellan and Ormerod are predictably effusive about their star: the former praises his “passionate attachment to us” during the film’s difficult financing, and credits him with “edge and intelligence”. “There’s a huge difference between Georges and Rob,” Donnellan says. “Georges rises to the top with no ­talent. Rob has masses of it.” (Donnellan sees Bel Ami as a parable on modern celebrity culture.) They also attribute the idea for a five-week theatre-style rehearsal process to the actor, a savvy move that allowed him to soak up their reservoir of knowledge about performance and period. He showed up every day for 10 or 11 hours. “I ended up doing mime and crazy improvisations, because you run out of stuff to do,” he says. “One day, Holliday [Grainger, his co-star] and I ran around screaming at each other for four hours.” Pattinson can’t articulate how the process fed into his performance, although when he arrived on set in ­Budapest in February 2010, he was ­worried he had overcooked it.

Meanwhile, Ormerod and Donnellan were taking the baby steps that come with being debut film-makers. The former focused on the design tapestry, the latter on the actors. Pattinson recalls them putting a row of audience heads at the bottom of the monitor, but the graceful story­telling they bring to Bel Ami bodes well for their move from stage to cinema. “We’re now rather bitten, I’m afraid,” Donnellan says.

Published in 1885, Maupassant’s masterpiece was shocking in its day. The author knew he was on borrowed time while writing this, his second novel — he eventually succum­bed to syphilis — and it is infected by a spirit of nihilistic hedonism, of indulging base instincts while you can because, as the antireligious Duroy puts it: “This is the only life; there’s nothing after.” Pattinson wishes they had kept a shot near the end where Georges turns to a crucifix and thanks God for his good fortune. “It was done in the most blas­phemous way,” he says, “thinking of God as Father Christmas, which was funny. There’s a lot of misery in the movie. It’s not as funny as I thought it was going to be.”

From THR (from earlier this week):
"Swiss distributor Falcom has secured all rights in German-speaking Europe for Cosmopolis, David Cronenberg‘s adaptation of the Don DeLillo novel starring Robert Pattinson as a billionaire Wall Street broker travelling on a odyssey through Manhattan to get a haircut. Colin Farrell was originally slated to play the lead before being replaced by the Twilight star.Cosmopolis also features Paul Giamatti, Juliette Binoche,Smantha Morton and Canadian actress Sarah Gadon.
Falcom plans to bow the film this year in Germany, Austria and Switzerland. A domestic release date has yet to be set."

Update from the official Falcom distributor site (translated):
"LINE UP 2012
This year, Falcom is increasingly going to focus on international productions: In spring, it starts off with David Cronenberg's new film Cosmopolis with Robert Pattinson in the role of a billionaire Wall Street broker who gets involved in sex, gambling and power. (...)"

So does this really mean a release at Cannes? Remember the poster with the release date "May 18th, 2012" which was spotted at the Berlinale? We'll keep our fingers crossed! 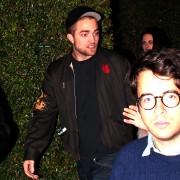 Interview of Rob from the 'Bel Ami' Premiere (Starxtreme)

More HQ pictures after the jump
Read more after the cut!
um 2:53 AM No comments: Links zu diesem Post