Rob's interview with the LA Times 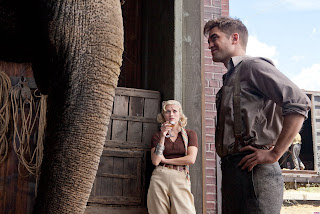 Robert Pattinson: 'Water for Elephants,' the perfect antidote to the 'Twilight' grind
Robert Pattinson has nothing but love for his recent experience on the set of “Water for Elephants,” director Francis Lawrence's adaptation of the popular novel that's set to open in theaters Friday. It was a far cry from his current job, finishing the grueling six-month shoot for the back-to-back filming of the last two “Twilight” films, based on Stephenie Meyer's final book in her bestselling series of young adult novels, “Breaking Dawn.”
Pattinson took a moment for a brief phone interview before he was needed on the set of a night shoot for the vampire mega-hit. He seemed downright exhausted. “I'm just arriving at set, thinking I'm going to work all night,” he said. “I'm kinda losing my mind.”
Question: Sorry to hear you're so exhausted. Can you tell us what your time was like on “Elephants,” with Reese Witherspoon?
Pattinson: It's easily one of the best experiences I've had making a film and it's by far one of the best experiences in my life. It didn't even feel like work and a lot of that had to do with Reese. She makes an effort to make it like that. I think she believes that it's really important to enjoy your work, especially when you have to be there for so many hours every day. I made a great friend out of it.
Question: How did working with the animals impact the environment?
Pattinson: When you have totally unpredictable elements, and there are dangerous elements in every single scene, everyone is in the same boat. If you're trying to herd up a pack of horses, it doesn't matter who you are. There is manure everywhere and everyone was filthy all the time. It was an egalitarian set because of that. It's quite inspiring to be around [the elephant]. It doesn't really matter what your taste is, everyone is going to like being around an elephant. It's not like being around another actor some people may not like.
Question: Reese mentioned that she found the paparazzi attention on you unlike anything she's seen before. What do you think?
Pattinson: She's trying to sound humble about all this but she's in all these magazines every week. It's a circus outside her marriage. Plus, I always see her [in them] buying her sandwiches and going to yoga.... I guess she's kind of accepted it in a lot of ways.... It's just a strange situation to be in if you're a sane person to have that kind of attention put on you.
Source | Robstenation
um 10:13 PM