Latest News on "On The Road"

Some tweets from producer Charles Gillibert

Re: A poster and an official site

Re: Exhibition in the US

Re: Events in Canada

"On The Road" and "Cosmopolis" possibly at Cannes? by cineurope
As Berlinale comes to a close, professionals have turned their attention to the 65th Cannes Film Festival, to be held from May 16 to 27, and observers are already speculating about the films that will be selected this year by Thierry Frémaux. Among those most likely to make it to Cannes are [...] On the Road by Brasilian director Walter Salles, Cosmopolis by Canadian director David Cronenberg.

Germany: Concorde picks up OTR by chicagotribune
Concorde has been flexing its muscle since its extraordinary success with "The Twilight Saga" while maintaining a distinct profile that includes mainstream [...] as well as international arthouse and specialty titles like [...] Walter Salles' "On the Road".
(thanks evendia for the heads-up)

Concorde already listed "Unterwegs - On The Road" on their official homepage: 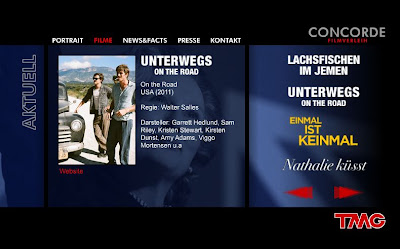 German release date apparently is October 4th, 2012, however, the official German homepage for "On The Road" (still under construction) states "Released in autumn 2012".